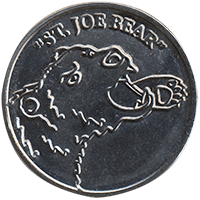 “Bear,” the St. Joseph High School mascot figure is the star of our 2019 token. This masterfully hand-carved figure was sponsored by the SJHS Class of 1969 which celebrates its 50th Reunion this year! There is nothing cute and cuddly about our dark brown bruin. Its ferocious stance represents generations of fierce pride in everything it means to be a St. Joseph Bear. You will find “Bear” in the front row on the Carousel deck sporting its bright maize-and-blue saddle. “Go Bears!” 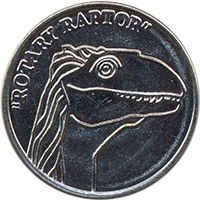 We proudly featured “Rotary Raptor”on our 2018 token. It commemorates the100th anniversary of the St. Joseph-Benton Harbor, District 6360, Rotary International Club. (This local club, along with a private donor, sponsored “Rotary Raptor.”)
Throughout the Club’s century of service, its members have provided countless volunteer hours to local nonprofits and schools. In just the last 25 years, they have raised and donated nearly a million dollars to help improve local health, education and economic and community development projects as well as funded international initiatives to end polio and provide safe drinking water. However, for our riders who love dinosaurs – the Rotarians’ best gift to our community is “Rotary Raptor!” 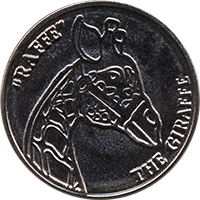 “Raffe” the Giraffe, featured on this token, is one of our riders’ favorite figures. It is a stander so it does not move up and down as the Carousel turns. This makes it an especially popular choice for infants and young children. “Raffe” was sponsored by community leader and philanthropist, Lou Gast. Her fondness of giraffes has led to a large private collection that she shares with family and friends. One of her grandchildren, as a small child, could not pronounce “giraffe” and called the world’s tallest land animal, “Raffe." When Lou sponsored the tallest figure on the Carousel, she immortalized her grandchild’s endearing story. 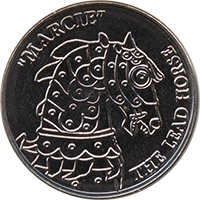 The Carousel’s lead horse, “Marcie” is named after Marcie Schalon, one of our strongest advocates and supporters who celebrated her 90th birthday in 2016. It is one of six white horses that are replica carvings from the original Silver Beach Carousel (circa 1910) created by master carver Charles Carmel. You’ll easily spot this beautifully bejeweled horse in the first row on the Carousel! 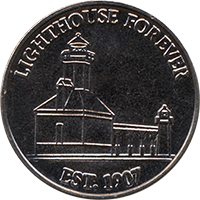 Three iconic landmarks in St. Joseph are the inner and outer lights and catwalk on North Pier. This year’s token honors the Lighthouse Forever fund drive that raised $2.1 million to restore and preserve the lighthouses. Thanks to the generosity of people, businesses and organizations from across the country, the lighthouses were restored to their 1932 appearances. Now you can take lighthouse tours during the summer months, weather permitting. Come see these century-old beacons of light all year around and become part of their story. 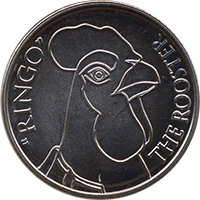 This token honors “Ringo” the Rooster, a figure donated by Ken Kaszubowski, who has served for years as the Carousel’s lead operator and head of maintenance. Ken chose the rooster figure to honor his grandmother. She owned a rooster called “Ringo,” named after Ringo Starr, the world-renowned drummer for the legendary Beatles. If you look closely at Ringo’s side you will see a painting of Ken’s grandparents’ farm. There Ringo would chase Ken and his cousins up to the farmhouse porch. Now, just as the original “Ringo” did, our rooster chases the other figures and riders round and round the Carousel House. 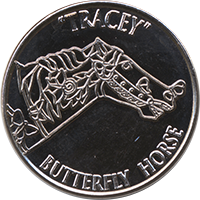 When community leader Tom tpark’s wife died, he and his young children wanted to memorialize the joy she had brought to their family and Southwest Michigan. One of the master carvers at The Carousel Works had envisioned creating a stargazer horse figure with a butterfly on its nose and a saddle shaped like butterfly wings. Since butterflies are a symbol of hope going forward and this original design elicited such happy feelings, Tom chose to sponsor it and named the figure “Tracey.” It has always been one of our most popular figures for all ages to ride and this token commemorates the smiles Tracey Starks keeps giving. 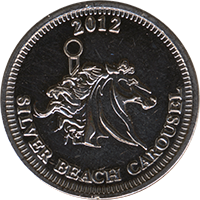 This token commemorates the first time the National Carousel Association (NCA) came to St. Joseph, Mich. The conference was held Sept. 19-23, 2012. More than 150 carousel owners, operators and volunteers from across the United States and from Canada participated in the “Up & Down the Coasts Midwest Tour and Technical Workshop.” In addition to seeing and learning more about the Silver Beach Carousel, the tour included a rare visit to the European Eden Palais Carousel on a private estate in Illinois, plus stops at the C.W. Parker Carousel at Crossroads Village in Flint, Mich., Spillman Carousel at the Public Museum in Grand Rapids, Mich., the DeBoer Brothers Carousel at Windmill Island, Holland, Mich. and a viewing of the Allan Herschell (Half and Half) Traveling Carousel at Eden Springs Park in Benton Harbor, Mich. This proved to be one of the most unconventional conventions in the NCA’s history. 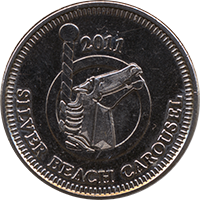 The Silver Beach Carousel Society solicited the talents of a local marketing company to create the new Carousel’s logo. The graphic artist who designed the logo grew up in St. Joseph and rode the original Silver Beach Amusement Park’s carousel many times as a child. She chose bright, happy colors (red and gold) for the background and featured one of the original white carousel horses, hand-carved by Charles Carmel in the “stargazer” pose. This horse figure reminds us to look to the stars and follow our dreams.

Make a Memory: Silver Beach Center (depicted on reverse side)
The Silver Beach Carousel is located at the Silver Beach Center – one of the best, year-round entertainment venues in Southwestern Michigan. It’s a fun place for all ages! An indoor boardwalk connects the Carousel House to Shadowland on Silver Beach, a bright and airy ballroom that hosts public and private celebrations and special events, and Curious Kids’ Discovery Zone by Curious Kids' Museum where ages 3 to 12 years old have a blast interacting with hands-on educational exhibits. You’ll make a memory at every turn while you’re here! 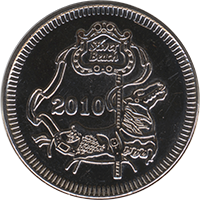 In 2003, the Silver Beach Carousel Society, Inc., began the monumental task of raising funds to create a new, million-dollar Carousel near Lake Michigan’s Silver Beach in St. Joseph, Mich. It would feature two chariots (a wheelchair-accessible sea serpent and a rocking peacock) plus 48 horses and menagerie figures, hand-carved and painted by The Carousel Works in Mansfield, Ohio. Around the top of the Carousel would be 18 rounding boards that would tell the area’s history using montages of computer-colorized historic photographs. It is believed to be the first time a carousel would use photographs instead of paintings. On Jan. 2, 2010, the new Carousel thrilled its first riders ... and it has been doing so ever since!