The Wizard of Silver Beach

A young boy, about six years old, presses his nose against the glass case and his eyes widen. He says to his mother, standing behind him, "Look Mom, that's what it was like in the old days." She smiles as she watches her son peer deeply into the 2-foot by 6-foot model of Silver Beach Amusement Park.

Just days before Ralph passed away, his life partner and soul mate, Connie Yore, taped the last Annual Snowball Winter Nationals at the Kitron International Speedway. This video gives a glimpse into Ralph’s charming imagination. One, two, three … go! The Silver Beach Carousel family is saddened to share the news of the passing of our great friend, Ralph Kitron. Fondly known as “The Wizard”, his imaginative creations in the Carousel building and the Silver Beach Amusement Park Museum will be a constant reminder of his enthusiasm and his unending support for preserving the memories of the past and helping thousands to create new memories whenever they visit the Silver Beach Center.

Before Ralph Kitron passed away, he asked that friends and family continue his legacy of fun and entertainment at the Silver Beach Amusement Park Museum. In lieu of flowers, a donation can be made in Ralph's memory online through our PayPal account. Click here. Or you may make your gift with cash, check or credit card in person or by mail at 333 Broad Street, St. Joseph, MI 49085.

Thank you ... Ralph's spirit will live on forever in our hearts.

The Wizard of Silver Beach

A young boy, about six years old, presses his nose against the glass case and his eyes widen. He says to his mother, standing behind him, "Look Mom, that's what it was like in the old days." She smiles as she watches her son peer deeply into the 2-foot by 6-foot model of Silver Beach Amusement Park.

The little boy's imagination allows him to disappear into the crowd of people lining the beach, unaware that teens are kissing beneath the blankets as he walks across the sands. He's aiming for the Silver Beach Carousel, the band organ music sending his spirits soaring as he nears. Then he passes Shadowland Ballroom where couples dance to Big Band tunes. 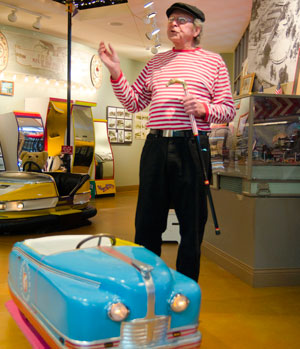 The boy hops on the moving sidewalk and it glides him to the Ferris wheel. He can smell grilled beef as he nears Eddy's Hamburger Hut. He looks up at the large spinning wheel twinkling with lights as riders gaze out at things he can't see from his earthly vantage point. The boy wonders if they can see the Chicago skyline.

When he notices the flashing lights on the police car, the boy hastens past, not comfortable watching the man by the bus being handcuffed. He jogs toward the sounds of the laughing clown coming from the Laff in the Dark fun house and listens to the clickity-clack of the Comet roller coaster climbing the wooden rails. Happy screams fill the air as the train of cars rush down and rise just like the waves along the nearby beach. The boy can smell the ozone gas as he passes the Bumper Cars and he wishes he could shrink to fit into the tiny moving vehicles. 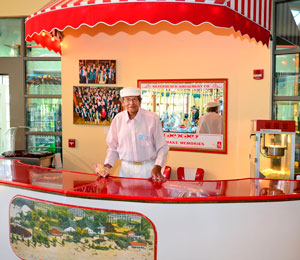 Is that cotton candy and popcorn he smells wafting from the concession stands? He looks up at a silver plane soaring overhead and then sees the cups spinning on The Whip. The deep, throaty moan of the lighthouse foghorn draws him back toward the beach. As easily as his imagination allowed him to enter the diorama, he leaves it, eager to explore the next interactive exhibit in the Silver Beach Amusement Park Museum.

His mother glances down at the sign on the amusement park diorama case. She notes that Ralph Kitron was the creator of this wondrous mechanical model with its glitzy lights, original sound recordings from the park and the magical smells of popcorn, hamburgers, cotton candy and ozone fanning through the air. 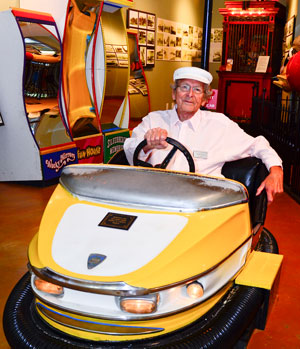 Ralph Kitron, the diorama maker, was known as "The Wizard" at Silver Beach Center. If wizards are ageless, then Ralph definitely qualified. His silver hair and weathered skin were the only indications that he was born in the late 1930s. He was always a boy at heart — a man who, like a cat, had lived through more near-deaths from strokes and throat cancer than most.

Perhaps it was his cat-like life that inspired his love of the cartoon character, the Pink Panther. It was certainly his "fountain of youth" that kept him racing nationally acclaimed dragsters long past when most men his age retreated to the stands.

Ralph had a sharp memory. He told us how as a small boy he'd walk the three miles with his father to Silver Beach Amusement Park. In the 1940s, before television shows lured families to spend hours indoors, Ralph said his summers were spent fishing off the St. Joseph pier and convincing his father to part with hard-earned coins so he could soar and spin on amusement rides. 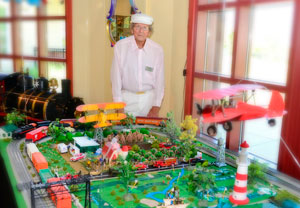 Ralph said he longed to share his memories of the beachside park that operated from 1891-1971. But he knew that old photographs could never express the sounds, the smells and whirling motion of the park. That is why, while convalescing from a stroke, he built the 1958 replica of Silver Beach Amusement Park for his girlfriend. His friends brought him wood from the lumberyard. He bought tiny people and period pieces on eBay® and collected actual sound recordings. Ralph researched each detail of the diorama and used an aerial shot of the park as his reference (the photo hangs behind the model in the museum). But it was his teen-age memories, and stories from others, that gave the model its uncanny realism.

After four months of painstaking craftsmanship, Ralph presented the diorama to his girlfriend, Connie Yore. She treasured it. However, when the momentum grew to build a new Silver Beach Carousel and to create a place to showcase Silver Beach Amusement Park memorabilia, Ralph and Connie donated the model to the museum.

"We were thrilled to learn the model could be part of the Silver Beach Center when we opened in January 2010. Without it we could never communicate the story of what Silver Beach Amusement Park was like," said Suz Schalon, president of Silver Beach Carousel Society. "We've come to feel extremely grateful for Ralph's genius." 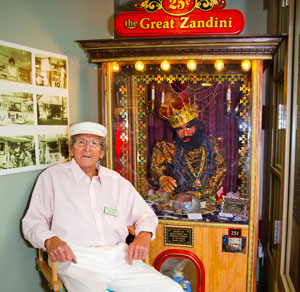 Ralph's genius and wizardry went well beyond the diorama. He said one of his greatest mechanical achievements was when he worked on a chicken farm in Denver, Colorado. There he mechanized the process from a hen laying an egg until it reaches the carton. He quit that job with only 15 percent of his lung capacity, a malady common for chicken farm employees. But his invention left that farm a better place for the next hires. Making things better, easier, safer for people was part of Ralph's innovative nature.

So, when he saw a need for more interactive exhibits at the Silver Beach Center, he took it upon himself to create the Great Zandini that sits in a booth around the corner from the amusement park diorama. Zelmoe Zandini is a black-bearded wizard-of-sorts. When you drop a quarter into the tray and push it, the Great Zandini comes to life. "Magically" you can see yourself in his crystal ball and within seconds, your fortune card spits out the slot with words of wisdom to guide your life. A sign on the booth states Ralph Kitron created Zandini in 2010. 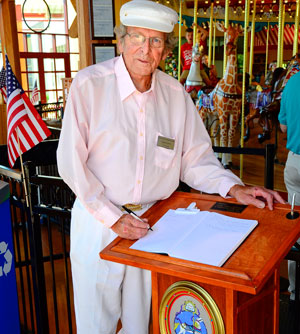 A few steps away, Laffing Sally sits idly in another booth, her toothy smile, beefy cheeks and wild yellow hair drawing you closer. You step away and suddenly she cackles and chortles. Ralph did the exhibit lighting and found a way to make Sally laugh again and again.

Inside the Silver Beach Carousel house is a guestbook containing thousands of names from people around the world. Ralph hand-built the wooden stand that holds the book. He designed it so it could double as a speaker's lectern.

Also in the carousel house, is a brightly painted, red-and-white striped concession stand. The mobile cotton candy and popcorn machines meld seamlessly into the design yet move easily when they are needed for events in the modern Shadowland Ballroom across the Silver Beach Center's boardwalk. Ralph took input from several people before creating a model of the concession stand and within days, Ralph constructed and installed a full-size one.

Legacies made and a promise kept

Ralph's contributions to the Silver Beach Center were a small part of his colorful life. He had three children, three grandchildren and three great-grandchildren. His "Swamp Fox" nostalgic AA top-fuel dragster was named one of the top 50 hot rods in America. He helped start the Venetian Festival, once one of the biggest annual events in St. Joseph. But when asked, Ralph brushed those accomplishments aside and said he was proudest of a promise he kept to his father. When the senior Kitron had a stroke, Ralph cared for him for four years so he wouldn't have to go into an extended care facility. 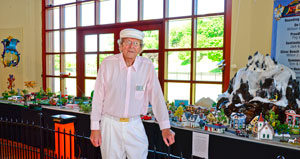 "When I was 18 years old, I wasn't on the same page as my father," he said. "He bailed me out of situations more than once. Those four years were my way of finally showing my gratitude."

"But it's not what you do or say in life that matters in the end. What matters is what you leave behind that others will enjoy for years to come. That's your legacy."

Silver Beach Center is full of "The Wizard's" legacies.

Asked whom he would have liked to bring to Silver Beach Center to see his legacies, Ralph answered faster than his dragster kicked up dust. "My mom and dad," he said. "I want them to see what I've perpetuated for them. I want them to be proud of me."

Ralph, your parents would be proud of you. So are we.