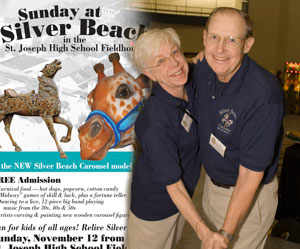 Dagne Schoenbach loved carousels almost as much as she loved her husband, Al. As collectors of antique figures, the couple possessed an immense knowledge of the lives and styles of master carvers. This knowledge proved invaluable as they co-designed the Silver Beach Carousel with Carousel Works.

Dagne has since “gone glimmering” – what we say when a friend of carousels dies. But her legacy lives on in every painstakingly carved figure, for no detail was ever too small... 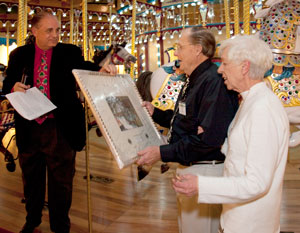 Carousel co-designer (with husband Al) and co-chair of sponsorship campaign, 2006-2009 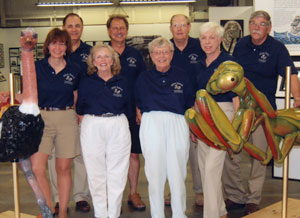 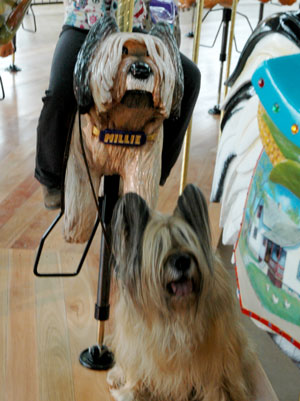 Sponsor (with husband Al) of “Millie” the dog figure.

For carousel lovers, the words “Gone Glimmering” are used when a carousel friend has passed. Since carousels embody fantasy and imagination, it is understandable that we hope those who have left us have now entered a magical place with soft sounds of laughter and music, amidst twinkling lights and happy riders on beautiful, jeweled figures twirling slowly through time and space.

Dagne Schoenbach loved carousels almost as much as she loved her husband, Al. And her dogs were next in line!

For decades, Dagne had pursued an interest in carousels that began when she was growing up in St. Joseph and having fun at the Silver Beach Amusement Park. Her enthusiasm rubbed off on Al and together they were frequent participants through the years at conferences held by the National Carousel Association (1973 – present) and American Carousel Society.

As antique figure collectors, Dagne and Al possessed great knowledge of the various styles and lives of the master carousel carvers. They admired the realism and classic proportions combined in the carvings of Charles Carmel, the carver of the original Silver Beach Carousel. This background was extremely valuable when they joined the Silver Beach Carousel Society board and took on the project of co-designing the new Silver Beach Carousel with Carousel Works of Mansfield, Ohio.

No detail was too small to consider as Dagne spent hours poring over photos and books about antique carousels to bring the best ideas forward in the new figures. As the team of highly skilled carvers at Carousel Works brought the figures to life and added their own considerable creativity, the Silver Beach Carousel took on a unique look among American Carousels.

Dagne and Al also organized the sponsorship materials and devoted several years to securing underwriting for all the figures and special components for the carousel including the Rounding Boards, Rocking Chairs, and Seasonal Paintings, among others.

If riding the carousel for the first time was thrilling to the donors in December 2009, the pride and satisfaction both Dagne and Al experienced in having all their hard work become an operating reality was beyond description. Thank you, Dagne and Al, for the legacy of joy that you helped design.

We were privileged to know her, and we mourn Dagne’s loss with Al and with the many friends the couple made locally and across the country.

“Al, I am so sorry for your loss and the obvious loss to the carousel world.

On behalf of the late Nancy Loucks (Founding Editor of The Carousel News & Trader) and myself, I would like to say thank you for the great support and encouragement that both Al and Dagne gave to us, especially during those early years of starting the magazine. We looked forward to seeing you at the various carousel events and learning from your carousel knowledge.Those were good years."

(Ed. Note:  Dagne and Al bought one of the first subscriptions to the magazine when it began publishing in 1985, probably while sitting at the Loucks’ kitchen table, which was Nancy’s “office”. They supported Nancy Louck’s vision of creating a publication to serve as an independent source for carousel news and interaction among carousel enthusiasts all over the world.

“I have known both Dagne and Al for about 30 years through various carousel events and personal communication. Dagne was a lovely lady and I’m still stunned that she has passed.  The Silver Beach Carousel is a real tribute to Dagne and Al’s passion and commitment to the carousel world in general and to St. Joseph in particular.”

(Ed. Note: Marianne began collecting carousel art over 60 years ago, when she first fell in love with the carousels of Coney Island. She is a leading authority on carousel art and history, and was a founding member of the American Carousel Society and National Carousel Association.  She purchased the original Silver Beach Carousel when the Amusement Park closed in 1973 and sold it in 2003 to investors in the Tri-Cities, Washington area. Plans to reconstruct the machine have not materialized and the Kennewick community is now seeking a purchaser for the carousel.)