Leading the Way to Happiness 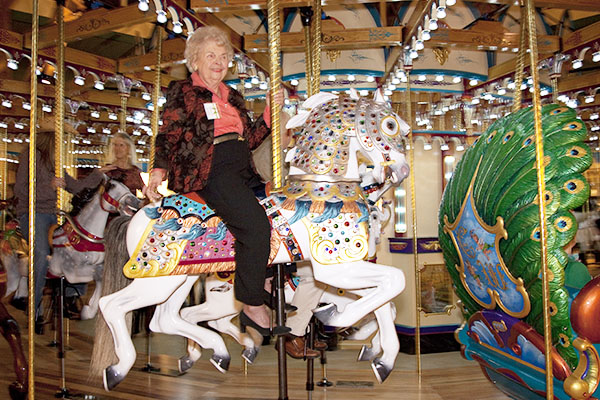 According to carousel legend, the lead horse is always the biggest and most decorated figure on the deck. You will find it on the outside row behind the last figure in the circle, a chariot.

True to the legend, the lead horse on the Silver Beach Carousel is a dazzling white figure, with flowing mane and its armored face and breastplate sparkling with 350 colorful jewels. It is a replica of the lead horse on the original Silver Beach Carousel (circa 1910). Bringing up the rear of this magnificent row of figures is the beautiful rocking peacock chariot. The lead horse is fittingly called, “Marcie,” named after one of the most generous and happy leaders that Southwest Michigan has ever known, Marcella “Marcie” Gast Schalon. 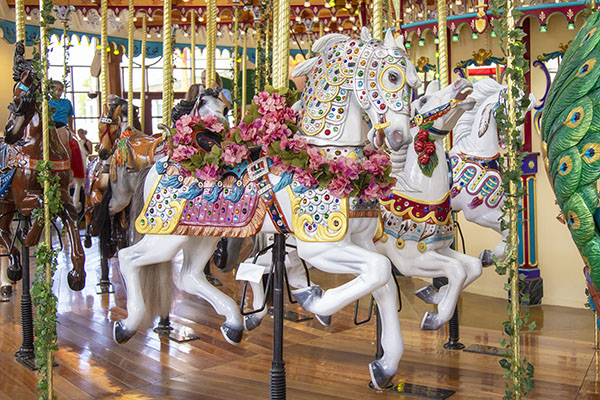 Marcie Schalon has “gone glimmering.” It is what we say when a treasured friend of carousels passes away. She brought joy to our world for 92 years, passing away on July 18, 2018. But you only need to stand in the Carousel House, watching the 50 colorful figures whirl by, seeing the thousand twinkling lights, the beaming faces and hearing the laughter to know that Marcie’s spirit is still, and always will be, here.

Preserving her legacy for generations

One of Marcie’s most heartfelt wishes was to continue the legacy of making the Carousel one of the happiest places on earth. To honor her wish, a tax-deductible donation can be made in Marcie’s memory to either the Silver Beach Carousel Society Endowment Fund at the Berrien Community Foundation or online through our PayPal account. Or you may make your gift with cash, check or credit card in person or by mail at 333 Broad Street, St. Joseph, MI 49085.

The woman everyone happily followed

Marcie was born and raised in Southwest Michigan. Some of her happiest memories were spent with family and friends at the Silver Beach Amusement Park which once entertained millions of children and adults just yards from where the Carousel now continues the tradition. Marcie wanted to bring back that fun for future generations … and she did.

“Without [Marcie], it would have never happened,” said Mary Goff, a former mayor and city commissioner of the City of St. Joseph, as she reflected back on the creation of the Silver Beach Center, home of the Carousel, and the Whirlpool Centennial Park and Compass Fountain across the street.*

Marcie was a major catalyst and donor. She, with her husband Ed, and brother Warren and his wife, D. Lou Gast, bought the property on which the Center now stands. They made contributions toward the building’s completion and Marcie was influential in leading others in the community to donate toward it as well.

Suz Schalon, executive director of the Silver Beach Carousel Society and daughter of Ed and Marcie, said her parents had three priorities in life: faith, family and community. You only have to look around the community and state to see how they impacted all three.*

There are many ways the Schalons or their Schalon Foundation have made life better for others. Their gifts have included the annual Summer Music Series for the Southwest Michigan Symphony Orchestra as well as funding for the Krasl Art Center, Blue Lake Fine Arts Camp and Opera Grand Rapids. Marcie made sure that a new ladder fire truck is now available to both the Cities of Benton Harbor and St. Joseph and she was also part of the initial funding for Lakeland Health System Outpatient Medical Center. Her church, Trinity Lutheran, was blessed many times over by her prayers, time and generosity.

Marcie earned a B.A. in Social Work, and then her Master's Degree from Michigan State College (now Michigan State University) in East Lansing, Mich., by age 21. Her passion for her alma mater led to her helping to establish the William C. and Martha H. Gast Business Library Endowment at the MSU Eli Broad College of Business in honor of her parents. She also helped launch scholarships and a social work program at MSU. In appreciation, MSU recognized her with its Distinguished Alumni and Outstanding Philanthropist Awards.

Marcie’s love for her family was unparalleled. But she still had a big place in her heart for the Carousel. On January 2, 2010, Marcie was its first rider when the bell rang and this magnificent machine of hand-carved and hand-painted figures sprang into motion. She was astride “Marcie,” leading the way as she always was called to do. 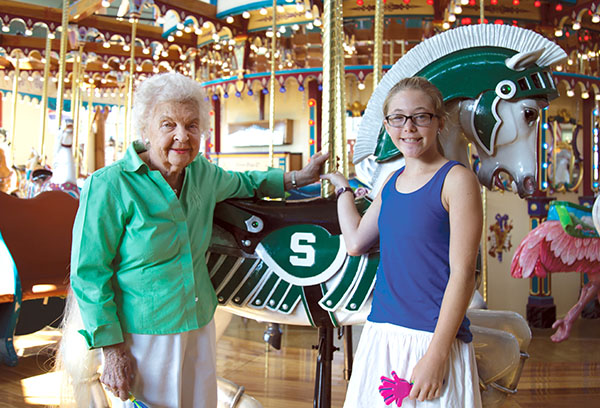 Then, on July 28, 2017, Marcie was also here when 11-year-old Ayana Harris became the Carousel’s 1,000,000th rider, whirling around on “Sparty,” the Michigan State University-themed horse. In the future, when the 2,000,000th rider chooses a favorite figure … Marcie’s spirit will be smiling then, too … and for millions more times after that.

Thank you, Marcie, for bringing happiness to each and every one of us.