Our current Silver Beach Carousel began delighting riders in January 2010, but that’s not the start of the story. It actually begins 100 years earlier ...

In 1910, Louis Wallace and Logan Drake brought a three-row, Coney Island-style carousel to their Silver Beach Amusement Park in St. Joseph, Michigan. The colorful machine, with its 44 hand-carved, lifelike horses and brass ring machine, was built by Fred Dolle of North Bergen, New Jersey. Dolle and another carousel builder, M.D. Borelli, formed a partnership to operate the Carousel for Wallace and Drake along the sandy shores of Lake Michigan.

What made this Carousel so stunning were the realistic horses carved and purchased from Charles Carmel. Acknowledged as one of the Master Carvers of the Golden Age of the Carousel, Carmel was praised by Charlotte Dinger in The Art of the Carousel as having “created what many believe to be the most perfect carousel horse, a harmonious balance of gentleness and drama.”

In the early 1920s, the Carousel was immensely popular with visitors to the amusement park. Wallace and Drake were determined to make sure the Carousel’s technology and décor remained cutting edge, so they converted the Carousel into a “jumping machine.” Eight pairs of jumping horses replaced 16 inner-row standers. M.D. Borelli and his wife visited the carousel in 1924 and spent several months adding their trademark bejeweled decorations to the horses.

In November 1930, the Silver Beach Amusement Company purchased full ownership of the Carousel and band organ from Fred Dolle's widow and M.D. Borelli. Then, during a planned repainting in the 1940s, the horses took on their signature, all-white, bejeweled appearance. After coating each horse with white primer, the painter died. When a replacement artist was hired to continue the work, only the trappings and secondary carvings were colorized. Legend has it that Walt Disney adopted the Silver Beach Carousel’s magical look for his carousels based on his belief that having all white horses made it faster for riders to choose which one to ride.

The park’s founder and remaining owner, Logan Drake, passed away on Sept. 27, 1947. His daughter Rebecca and her husband, St. Joseph Police Chief Harold Terrill inherited the Silver Beach Amusement Park. While many American carousels were lost to fire, the Silver Beach Carousel operated continuously until the park closed in 1971.

When the park closed, Terrill contacted Marianne Stevens of Roswell, New Mexico. Stevens helped found the National Carousel Association and the American Carousel Society. She co-authored Painted Ponies and was a renowned collector, restorer, and owner of carousels. Stevens had run an ad in the trade publication, Amusement Business, offering to purchase vintage carousels. She visited the St. Joseph area in 1972 and, the following year purchased the Silver Beach Carousel and took it to New Mexico.

People in Southwest Michigan missed the iconic, memory-making Carousel and wanted to return it to St. Joseph. In 1997, several individuals formed the Silver Beach Carousel Society, Inc., and began promoting the idea of bringing it back to the community. Sadly, they were unable to secure a site and funding for the machine before Stevens sold the original Carousel in 2002 to a group of businessmen representing the Tri-Cities area of Washington state. It took 12 years before that group was able to establish a permanent home for the Gesa Carousel of Dreams, as the merry-go-round is now known, next to the Southridge Sports Complex in Kennewick, Washington.

Despite the 2002 setback, the Silver Beach Carousel Society did not give up on the idea of building a carousel near Silver Beach. The society repurposed its mission to bring a new, hand-carved and hand-painted one to St. Joseph. Their vision was to make it a key attraction in the new Silver Beach Center, a family entertainment and reception venue that members from the community hoped to build on Broad St., just yards from the site of the former amusement park.

The Society enlisted the help of local carousel collectors Al and Dagne Schoenbach to select the six replica horse figures plus help design the 20 unique horses, 22 newly designed menagerie figures, plus the rocking peacock and wheelchair-accessible sea serpent chariots. As the design took shape, the Schoenbachs encouraged the Society to make sure that there was plenty of visual contrast, both light and dark colors, short and tall, and docile and spirited figures encircling the deck. After the figures were selected, the Society set out to find sponsors for each one ranging in price from $8,000 to $50,000. Every sponsor they found in the community had a special affinity to the figure they chose. Some had family connections or a personal story. “People didn’t just write checks, they wrote their stories with each figure,” said Suz Schalon, executive director of the Silver Beach Carousel Society.

The figures weren’t the only storytellers on the Carousel. The Society also sought sponsors for the 18 rounding boards that appear at the top of the Carousel. Each one depicts a different historical theme that reveals the people, places and events that Southwest Michigan never wants to forget. What makes the boards extraordinary is how they tell the stories. Traditionally, carousel rounding boards are hand-painted, pastoral scenes. The Society, however, commissioned computer graphic artists to create what is believed to be the first carousel rounding boards to use a montage of colorized, historic photos. The Silver Beach Carousel not only shares local history, but it also made history!

With sponsors secured, the Society enlisted the talents and skills of preeminent carvers from The Carousel Works in Mansfield, Ohio to build the million-dollar Carousel. The Carousel Works carves all figures from basswood using traditional patterns and poses in the tradition of carousels manufactured in the late 1800s and early 1900s. The figures are glued together, using no nails or screws, just as was done a century ago. Then the figures are finish sanded, primed in white, decorated using multiple coats of colorful paint and jewels where appropriate, and finished in a high gloss for durability. The result is the gorgeous figures you see and ride today.

1920s: Silver Beach Amusement Park converts the Carousel into a “jumping machine” replacing 16 standers with horse figures that go up and down. In 1924, M.D. Borelli and his wife add their signature bejeweled decorations to the figures.

1940s: The amusement park repaints the horse figures. However, after the coat of primer is applied, the painter dies. The next artist only colorizes the trappings and secondary carvings, which create Silver Beach Carousel’s renowned design of all-white horses.

2012: Sept. 19-23, the National Carousel Association Convention (NCA) comes to St. Joseph for the first time. Over 150 carousel owners, operators and volunteers from across the United States and from Canada participate in the “Up & Down the Coasts Midwest Tour and Technical Workshop.”

2013: Carousel figure collector Al Schoenbach, sells two of the original Carousel’s Carmel-carved horse figures to the Silver Beach Carousel Society. Both are now on display as part of the Silver Beach Amusement Park Museum in the Carousel House. Each is available for sponsorship.

2017: On July 28, 11-year-old Ayana Harris is the Carousel’s 1,000,000th rider! She chooses to ride “Sparty,” the Michigan State University-themed horse. She receives a prize package plus the opportunity to announce the next ride and ring the bell. This sends the Carousel in motion to reach its future 2,000,000th-rider mark!

2020: The Silver Beach Carousel celebrates its 10th anniversary on Jan. 2! The birthday festivities include a weekend full of 50-cent popcorn in the name of throwback pricing, photo ops with the Birthday Hippo, free drawings, blinky rings and surprise prize rides. Guests also sign a supersized birthday card that doubled with cut out holes as a photo-op!

2020: On March 13, the Silver Beach Carousel announces it will close starting on March 15 due to the COVID-19 Pandemic. The initial hope is to reopen on April 5, but with safety in mind, the date ultimately is pushed back several times because of the wide-spreading sickness. The original closure aligns with Michigan's mandate that all public K-12 schools be closed during this time frame. Silver Beach Carousel also shares several tips according to the Centers for Disease Control and Prevention guidelines to help their usual guests stay safe and healthy.

2021: On July 23, the happiest place in Southwest Michigan welcomes back riders for the first time in over a year! The Carousel is open by reservation only for hour-long ride times. Thanks to volunteers, they are able to direct traffic flow and clean between each session for the health and safety of everyone. Visitors are filled with glee and laughter as they hop on for another ride again and again! Eventually, the Carousel is able to open on weekends and return to the token system we all know and love. Everyone is so happy to get back in the saddle! 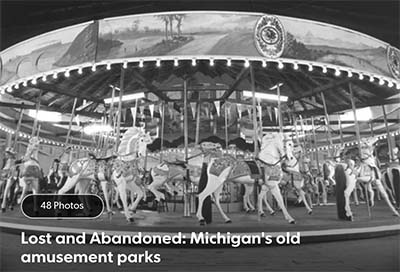 Lost and abandoned:
Michigan's old amusement parks.
Lansing State Journal rounded up parks you may remember and some you probably never knew existed.