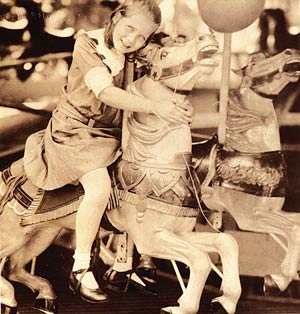 Below the bluffs of downtown St. Joseph there was once an amusement park. Years ago on Silver Beach, carnival rides and games of chance entertained crowds on the midway.

Though the Silver Beach Amusement Park was closed more than 30 years ago, memories of that popular place are still vivid. The sound of the old band organ booming down the boardwalk and the way the wind whipped through your hair when you rode the roller coaster, the smell of the ozone from the bumper cars and the "pinging" of the penny arcade machines still live on in the memories of thousands of residents and visitors.

The Silver Beach Amusement Park was first opened on the shores of Lake Michigan in 1891, when two men, who were partners in the boat building business, decided they could make more money by opening a boardwalk. It started small with concessions and games. Then came the carnival rides.

For less than $2, a family could take a dip in Lake Michigan, gobble up sweets, and play games of chance. They could spend the day riding the toboggan slide or the roller coaster called "Chase through the Clouds," which was a main attraction. As the 1920’s roared on, Silver Beach kept climbing. The last improvement was made to the park in 1927. It was called the Shadowland Ballroom.

As the years passed, tourism slowed at Silver Beach and in 1971 the park was closed, as was the carousel. Forty years later Silver Beach still draws a crowd. Most days it's a quiet place to take in the sun. Some say if you listen closely to the summer breeze, you'll hear the old band organ, playing a song of years gone by.